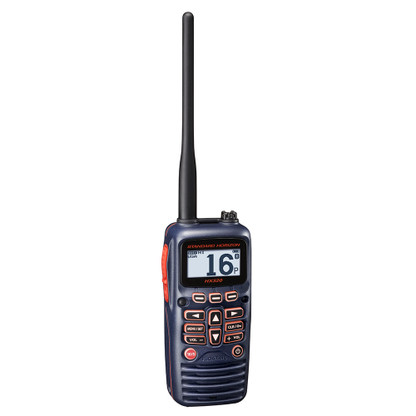 Engineered to be rugged and reliable, the HX320 is designed to float and fight against water intrusion with the highly recognized IPX7 waterproofing standard

Equipped with a USB Type-C charging jack, the HX320 comes supplied with the USB charging cable and USB-AC adapter to quickly and easily charge the radio from virtually anywhere.

If the HX320 is accidentally dropped overboard, it can easily be retrieved with the highly visible water activated Strobe light. The strobe light feature is activated when the radio is turned ON or OFF.

With built in Bluetooth technology, the HX320 can now be operated hands free using the optional Bluetooth headset model SSM-BT10.

Because the HX320 is built better, it’s backed better. If your Standard Horizon HX320 ever fails for any reason including water damage during normal use in the first three years, STANDARD HORIZON will repair or replace it free, without hassle or charges…period! If it fails thereafter in normal use it is covered by Standard Horizon’s Flat Rate Service Program.

This product hasn't received any reviews yet. Be the first to review this product!